The Light of the World

This famous painting, which hangs in the Side Chapel, is the original by William Holman Hunt, painted in 1853. 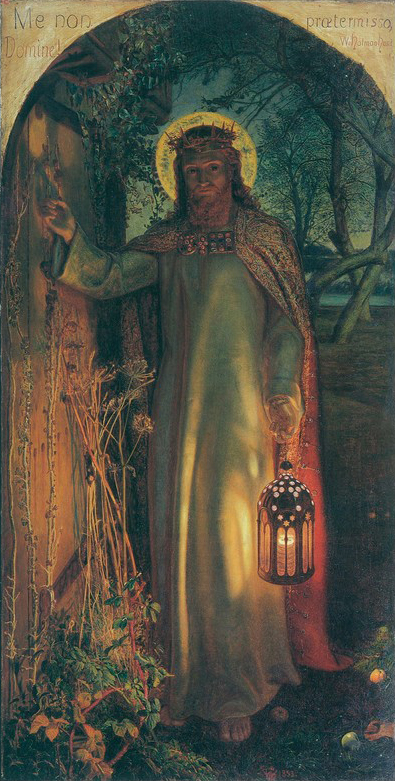 The Light of the World was begun when Holman Hunt was in his early twenties, and took a number of years to complete. Part of the reason for this was his desire to perfect the dawn, and he did not feel able to do this until his travels in the Middle East took him to Bethlehem where he saw the perfect sunrise. A larger replica, painted by Holman Hunt when he was nearly 70, hangs in St Paul’s Cathedral, London. The colouring and details of the replica are not so exact.

The painting was given to the College by Mrs Martha Combe, who with her husband, was a great patron of the Oxford Movement and admirer of the Pre-Raphaelites. The Combes funded the building of St Barnabas, Jericho, and the patronage was given to Keble.

There are two lights shown in the picture. The lantern is the light of conscience and the light around the head is the light of salvation with the door representing the human soul, which cannot be opened from the outside. There is no handle on the door, and the rusty nails and hinges overgrown with ivy denote that the door has never been opened and that the figure of Christ is asking for permission to enter. The bright light over the figure is the morning star, the dawn of the new day, and the autumn weeds and fallen fruit represent the autumn of life. The writing under the picture, which is rather hard to read, is taken from Revelation 3 ‘Behold I stand at the door and knock. If any man hear my voice and open the door I will come in to him and will sup with him and he with me.’ 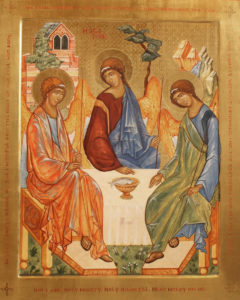 There are two other paintings in the Side Chapel, which are worth the visitor’s attention.

Hanging on the left wall is The Dead Christ Mourned by his Mother by William Key which was presented in memory of its previous owner, Dr William Hatchett-Jackson, father of one of the Tutors.

The icon of the Holy Trinity in the Side-Chapel was given to the College by its author, Ian Knowles, in gratitude for his time as an undergraduate at Keble and as a sign of his continuing support. Ian is the Principal of the Bethlehem Icon School, part of the Bethlehem Icon Centre that he founded in 2012, about which more information can be found at www.bethlehemiconcentre.org.