The Choir and Beyond

The College Chapel is perhaps the grandest ecclesiastical space in Oxford. Its resonant, cathedral-like acoustic is much in demand for concerts and recordings, and is home to a lively and active music foundation in which the Chapel Choir plays a primary role. It is also the main focal point for regular concerts promoted by the student-run Keble College Music Society, organ recitals, and the annual Keble Early Music Festival which takes place each February.

Following Paul Brough’s retirement, the college is delighted to have appointed Christopher Bucknall as its new Director of Music from September 1 2022.

Singing with Keble College Chapel Choir provides a unique and varied musical experience, and a solid choral grounding for life. The choir consists of approximately twenty-five undergraduates and postgraduates, and some are students at other colleges.

The College offers a number of Choral and Organ scholarships. Organ scholarship applicants must apply to read Music, although choral scholars read a wide range of subjects, including Music. Choral award holders all receive regular vocal tuition and participate in masterclasses with distinguished singers and coaches, and organ scholars benefit from instrumental, conducting and vocal tuition. A number of our recent scholars have gone on to sing with groups such as Genesis Sixteen and the Voces8 Scholars, and are beginning to develop their freelance careers. The choir also offers a number of graduate places, including paid positions as Lay Clerks and Graduate Choral Assistants. The choir always welcomes enquiries relating to future years, or from those interested in joining the deputy list. A few vacancies remain for both graduate and undergraduate singers for the academice year 2022/3. For more information please contact music@keble.ox.ac.uk.

Choral services are now being livestreamed. These can also be found at the Chapel’s YouTube channel, together with a number of other videos reflecting chapel life. 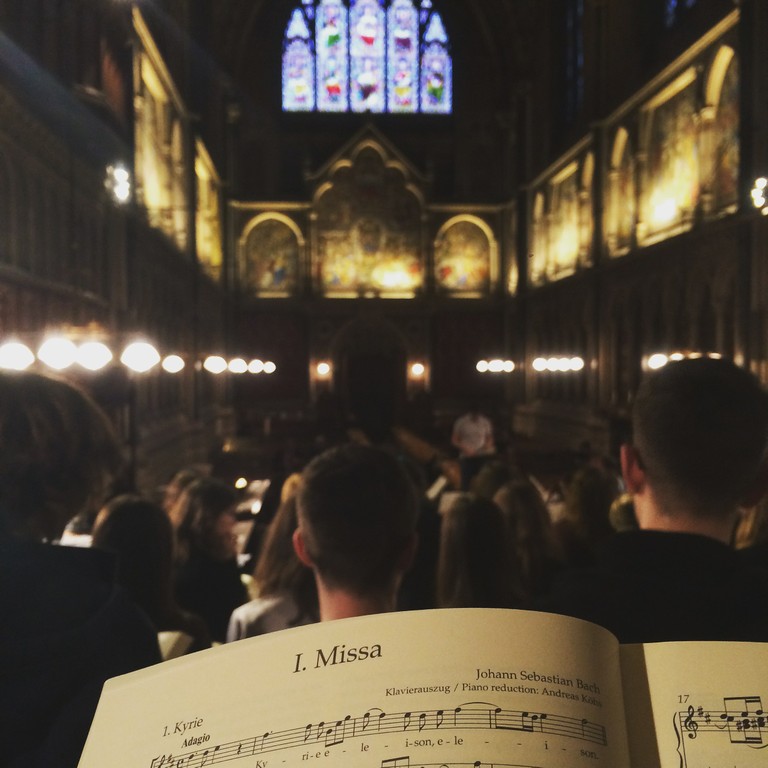 The main function of the choir is to sing the weekly services in addition to special events such as the Christmas Services and College feasts.

During Full Term the choir sings three choral services per week: Sung Eucharist on Sunday at 5.30pm followed by Formal Hall, Evensong on Wednesdays at 6pm, and Sung Compline on Thursdays at 9pm. The choir rehearses every Thursday from 5.15-6.45pm. Then there are additional services during the course of the year, plus involvement in various College events, particularly at Christmas.

We regularly undertake tours abroad, as well as concerts within the UK. In the past few years we have travelled to Hong Kong and Singapore – to sing at the Oxford/Asia 2017 Alumni Weekend – as well as to the Czech Republic, France and Sweden. A scheduled performance at Saint Thomas Church, Fifth Avenue, New York City in April 2020 has regrettably had to be postponed. Closer to home, we featured in the 2018 Cheltenham International Festival of Music, singing a concert which included Duruflé’s Requiem, and returned to the Edington Arts Festival in December 2021.

The choir has broadcast regularly on BBC Radio 3, most recently two Choral Evensongs, one broadcast live in November 2021, the other subsequently broadcast on 9 March 2022.

The choir has produced a number of acclaimed CD recordings. The most recent, ‘Resurrexi! Easter in Vienna with Mozart and the Haydn Brothers’, was released on 1 April 2022. It was recorded with Oxford-based Instruments of Time & Truth, and is the choir’s first recording since the appointment of Paul Brough in 2020: ‘…so sweetly done that you’re immediately tempted to hit the repeat button’. The Arts Desk.  ‘Ave Rex Angelorum’, a sequence of music tracing the journey from Christ the King to Epiphany, was released in 2020: ‘Consistently polished singing, sensitive organ playing and energised direction, there can be no better Christmas CD out this year.  In short, buy it!’ (Opera Today). A collaboration with the Academy of Ancient Music on the first recording of Francisco Valls’ forgotten Missa Regalis, not performed for over 200 years, was described on BBC Record Review as ‘a really confident performance, and a splendid recording’. ‘Ceremonial Oxford: Music for the Georgian University by William Hayes’ was also recorded with Instruments of Time & Truth: ‘Sung exquisitely… the excellent choir sings with nuanced harmonic shading and flawless tuning’ (Gramophone) 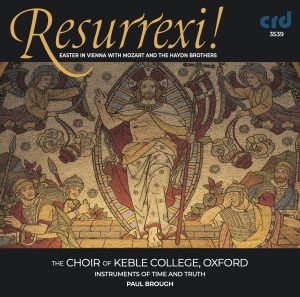